How a Slack app started and almost ended Tella

Today we launched a Slack app.

It’s a very simple app that does one very important thing: it plays Tella videos inside of Slack.

The app didn’t take more than a couple days to ship, but the idea has been years in the making. In fact, the idea for the Slack app pre-dates Tella itself. It all began with a Slack channel created at InVision way back in 2019.

Where the heck is y?

InVision wanted to improve how the product team communicated with the rest of the business. Because InVision was both a remote company (before it was normal) and a very big company (800+ employees at the time) they couldn’t fix this with more meetings or different emails. So they made a Slack channel instead.

The new channel had a simple requirement: product teams had to post videos about their work in progress. The rest of the company would tune in and watch the videos whenever they wanted. Videos had the engagement of a live call and the asynchronous-ness [sorry] of written documentation. It was a video feed about product stuff shoehorned into Slack and it was called #product-backstage.

2019 was a tricky year for InVision. Mission-critical projects were behind schedule and competition from Figma was intense. People outside the product team were desperate for information and updates. They needed it to get new leads, close deals, upsell customers, help users, and so on. Clark the CEO described it like this, “People want to know what ever happened to a, what happened to b, where the heck is y? A lot of where the heck is y.”

The goal of #product-backstage (aka “Backstage”) was to give people those answers. In a way that worked for a remote, highly distributed organisation.

Shortly after launch, Backstage started having the desired effect: improved communication from the product team. Each video became a thread of discussion and feedback. The videos and the conversations about them let sales, customer success, support and other functions get closer to the most critical part of the business. Sales reps tagged other sales reps, customer success managers asked about timing, support agents wondered about browser support, and so on — all without any meetings. Product teams became content creators and the rest of the biz became their followers.

But Backstage was interesting beyond a good example of the benefits of asynchronous video.

The people posting knew they had an audience, it wasn’t the same as DMing a coworker with a video. Instead the whole company was watching. This motivated people to make better content. Video by video, the quality got better — and then people tried to outdo one another.

Product managers went from posting long, unedited Zoom recordings to sharing short demos full of jokes, gifs, and even homemade sound effects. Soon everyone knew who the best creators were, and their updates were the most shared, talked about, and anticipated.

Backstage was just a Slack channel so there was no barrier to engagement. I opened Slack at 9am in Amsterdam and browsed videos my San Francisco colleagues posted the day before. Slack was the platform and Backstage was a new kind of content — like Instagram launching Stories or Twitter adding Spaces.

Backstage was the inspiration for Tella. I saw two problems to be solved:

The first was that making a video took too long. For a 5 minute product demo you could easily spend 15 minutes planning it, 15 minutes making slides, another 30 minutes recording, and then 30 minutes editing it together. Then add the time to export the final video and upload to Slack.

Spending hours on a short update video wasn’t justifiable or sustainable, no matter the benefit. This had to change if more people were going to make fun video updates and companies implement their own #product-backstage. Making videos at work needed to be fast and easy.

The second problem was that people were lazy. Not the creators, but the viewers. Backstage made it easy for other teams to watch product content — all they had to do was click on the channel and then watch videos right there in Slack. The lack of effort viewers had to make helped maximise the audience, and this motivated creators to keep posting because they knew people would be watching.

But when audience needs to make a lot of effort — another login, another set of notifications, another surface for work — it won’t be an audience for long. Watching videos at work needed to be frictionless.

So Tella was going to be a simple way to create videos and post them to Slack.

We would make it easy to create a good video, so creators would be open to trying us. We would share the videos in Slack, so there would be zero friction for viewers. Plus we could grow via the internal networks of companies: when a viewer watches a video they would want to make their own and so they’d sign up. Goddamn startup genius.

Except that’s not what happened.

About a month after quitting InVision, midway through Y Combinator’s Summer 2020 batch, my cofounder and I noticed a problem. You couldn’t actually watch a Tella video when you shared its link in Slack. Instead you got a URL and a static thumbnail image — no video. To watch the video you had to click the link, leave Slack, get redirected to Tella, and then press play. This was not the zero friction viewing experience we had planned.

We completely ignored how videos play in Slack. Back at InVision most people were uploading video files for their Backstage posts. Because Slack supports inline playback of uploaded video files viewers had a great experience. But our whole idea was to simplify and speed up the creation process. Downloading a video from a web app then re-uploading it into a different web app was not simple and not fast. How did we miss this?

There’s no such thing as magic

Backstage wasn’t just videos made with Screenflow, Final Cut, or Premier Pro. It was also a lot of Looms. But Loom videos bugged us. You couldn’t record different clips, you couldn’t edit them, you couldn’t change how they looked, and your camera bubble was always in the way. But they were easy to make and most importantly you could watch them in Slack. All you had to do was post the link. Kinda magic.

YouTube, Vimeo, and Loom. Those were the video links you could watch without leaving Slack. We understood the support for YouTube and Vimeo — the giants of online video — but Loom had playback in Slack since 2017 (I think?), when they were still a tiny startup. How did they do it? Turns out it wasn’t magic, but the next best thing: Slack investing in your seed round.

We trawled through documentation trying to find a way to integrate. Nothing. We asked everyone we knew for intros at Slack. Also nothing. I was at wedding in the South of France when the bride pointed out a friend who worked at Slack. I’d barely introduced myself to her before asking who she knew in devrel. ABSOLUMENT RIEN.

There’s no 10x founder story here. We never got Slack on our cap table and we never got Tella videos in Slack. We had to change the plan. Tella went from a simple way to create videos and post them to Slack to a simple way to create videos and we’ll figure out the Slack thing some day. But it turns out building a browser-based video app has enough to stay busy for a couple of years. It also turns out that people post videos in more places than just Slack.

Then in July this year Slack released the “video block”. It’s an SDK for adding inline video playback to Slack apps. We heard the news from Slack on a Friday and had customers testing our app on the Monday. A few weeks later and the app — Tella for Slack — has been approved for distribution on the Slack App Marketplace. Thanks, Slack. 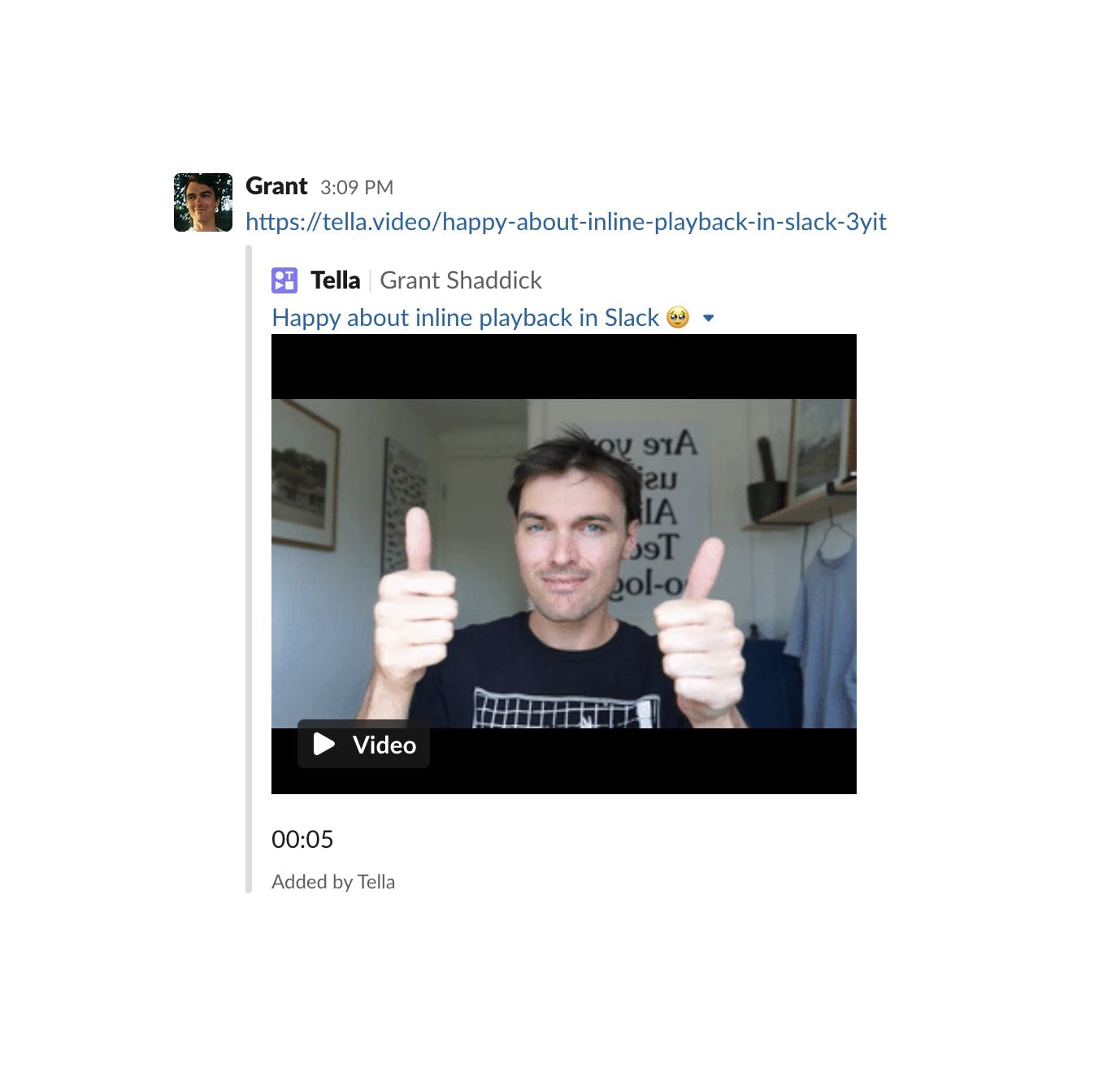 With Tella for Slack you can post a video in Slack and others can watch it right there in the channel. It’s nothing special, and you have install the Slack app first, but it’s a big, long-overdue step towards the Tella #product-backstage dream.